What is Picaridin and is it safe to use on kids? 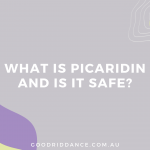 Picaridin is a synthetic chemical compound that was developed by Bayer in the 1980s as an alternative to DEET in insect repellent formulations. While it is often referred to as Picaridin in Australia, you may occasionally see it listed as icaridin. When used in an insect repellent formulation, Picaridin can be used to repel a range of insects, including mosquitoes and ticks [1].

How does Picaridin work?

Picaridin is an insect repellent, which means it does not kill mosquitoes or other biting insects. Like DEET, the exact mechanisms of how Picaridin works are not strongly understood. It is believed that Picaridin works in two ways:

When comparing synthetic insecticides, Picaridin is widely considered a safer, gentler alternative to DEET in regards to toxicity and skin irritancy, especially for children. And unlike DEET, Picaridin won’t dissolve plastics [5].

Is Picaridin safe to use on kids?

While all forms of insect repellents should not be used on babies under the age of 3 months, there are alternatives to both Picaridin and DEET that can be used between the ages of 3-12 months (and beyond)!

What is the safest insect repellent to use on babies?

Many people do jump to a natural insect repellent when they want something “safe” but it is important to remember that just because a product is natural, doesn’t mean it is safe.

The other aspect of insect repellent safety actually comes down to effectiveness. There are plenty of home recipes out there, or untested products which simply don’t provide a high level of long-lasting protection which is really important if you want to protect your little ones from mozzies and the diseases they carry.

This is one of the reasons why DEET and Picardin products are so heavily recommended. They last much longer on your skin when compared to natural active ingredients such as essential oils. To make an essential oil work as an effective insect repellent, it needs to be formulated with a fixative and this is really hard to do with a spray (without introducing synthetic ingredients).

This is one of the reasons why Good Riddance Sensitive Insect Repellent was designed as a cream. The cream base contains beeswax and shea butter which hold the essential oils onto your skin for much longer than a standard natural insect repellent.

The unique formula is DEET, Picaridin and citronella free so it is a great choice for those wanting to avoid synthetic repellents or for babies under the age of 12 months.

Good Riddance Sensitive Insect Repellent uses a blend of lavender and lemongrass as active ingredients which are safe and gentle to apply on little ones, during pregnancy and on sensitive skin. The safe, natural formula is perfect as an everyday repellent against mosquitoes, midges and sandflies, including the varieties of mozzies that carry diseases such as Ross River and Dengue.

Additionally, Good Riddance has been clinically tested and APVMA approved to ensure its effectiveness.